I take lessons with a wonderful older woman who is loved and respected by the horse community of this isolated, rural area (and beyond). She grew up in a ranch family but expanded her knowledge beyond quarter horses and cow work to train in classical dressage and Doma Vaquera. Last year she traveled across the country to work with Bettina Drummond, who trained under Portuguese horseman Nuno Olivera. It’s an honor to ride with Alice, and each time I make the effort to get over there I marvel that we are lucky enough to have such a consummate horseman at our fingertips here in the middle of nowhere.

Alice is also a fine teacher, and her lessons begin and end in the same way. She always starts by asking how things are going and what I might like to to work on. This time I responded by saying, “well, this is kind of embarrassing, but we’re still awful at bridling.” I went on to babble for three minutes about our problems, how he backs up 15 steps and sticks his head straight in the air the moment I present the reins, how I have trained him using positive reinforcement to drop his head to the ground but it hasn’t seemed to help, how I probably screwed him up to begin with by being rushy and banging him with the bit and maybe his teeth need floating. She listened patiently because she is a fine teacher, but in the end just said, “let’s have you watch first.” She proceeded to take my horse, “bridle” him using the leadrope as a bit, asking him to drop and pick up the “bit” repeatedly with his head cradled gently in her arms. He did not take a single step backward. His nose wasn’t in the arena dirt, but it never went above her waist. He did not protest. She sent him an invitation and he RSVP’d ‘yes.’ She repeated the steps with the bridle with the same result, then handed him over to me. He said something along the lines of ‘well, you’re still not that woman but you are under her guidance so okay.’ (RSVP: maybe.) I really believe there is some amount of magic to Alice’s level of horsemanship. It’s timing, it’s your own self-carriage, it’s visualization, it’s knowledge and understanding. It doesn’t involve excuses or long-winded variations on a single theme. It’s simple and clear and it works.

That all being said I have no idea if I will be able to get the bridle on this horse as effortlessly as I did Saturday ever again. 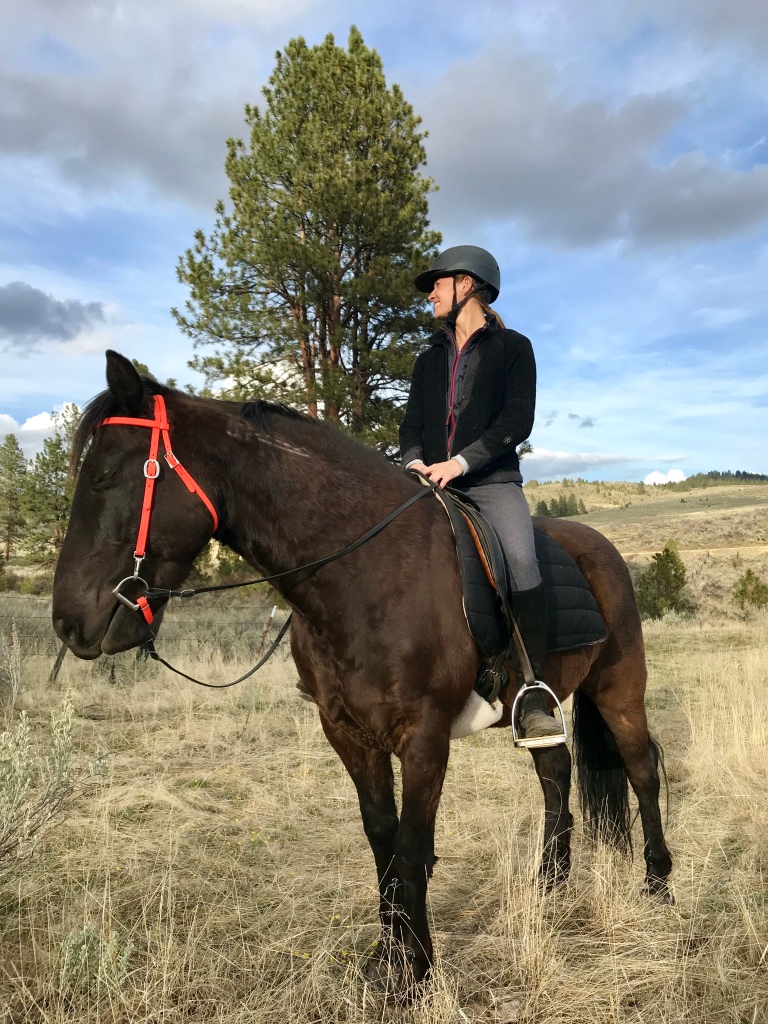 In lieu of very funny looking video from the lesson, here is a pretty picture of us on a hack the day before.

After that lesson in humility, I told her I was also interested in working more on my seat aid, as the concept is a bit obtuse at my level of practice and rust. So we worked first on the lunge with her instructing me to feel the timing of his inside hind and count it out, using the feel of my inside sit bone and a slightly forward outside rein at both the walk and the trot. I’ve been feeling bouncy and stiff in my lower back lately and this exercise was helpful in getting my butt where it needed to be. She also encouraged more posting from the thigh and had me standing in my stirrups at the trot, which felt so impossible it was almost like I’d never done half-seat in my entire life. (I spent 1/3 of my life in half-seat or two-point during my teenage years.)

After work on the line, she had us work at the trot first riding the arena as a square (we’re really good at that; for some reason that’s one of the dressage lessons that sticks with me) and then making circles in each corner. The circles were challenging – she said to make them ten strides and the first few took at least 13-18. But we got it eventually. At this stage she was mounting up on the Andalusian that she’d had tied for the first part of the lesson and for the remainder we rode together, which was very fun for me who constantly rides alone, and good practice for Henry who is a formerly wild horse who still wonders on occasion what the hell he’s doing with his life now. We followed Alice and the grey Andalusian around the ring for the remainder of the lesson, doing modified shoulder-in work as a means of suppling. We both needed some time to catch on to this exercise, but when we did my boyfriend was cheering and very excited so I imagine it must have looked pretty cool. Unfortunately he was too engrossed to take any video at that point.

At the end of each lesson we go over our “take-home.” I always know this question is coming but still struggle half the time. I went with suppleness, as the final exercises were revelatory and continuing them will greatly benefit Henry’s “football player” body and my confidence that my dirty, short, stocky mustang is capable of great things.

Alice was very encouraging and kept saying how much she liked Henry’s attitude and energy level today. She would say things like “that’s really great…for Henry” because she understands that this is a formerly-wild animal that got rushed through a 100-day training challenge and then purchased by an admittedly novice re-rider. He can be focused and excited to work and then suddenly go sullen and shut-down. She also complimented his weight, which is something we’ve been working on for more than a year now, and probably is in direct correlation with the improvement to his energy level.

One weird take-home for me from this lesson, absorbed both by watching some video of myself afterward and seeing Alice in the saddle, is that gosh-dangit my stirrups are short. You can take the girl out of the jumper ring, but you can’t take the jumper ring out of the girl, I guess. Stronger thighs will buy me a longer leg, eventually. Our assigned homework was more suppling exercises, but I’m also self-assigning more leg work including going without stirrups.

One thought on “First Lesson of the Year”