We’re on a roll with scheduling and going to lessons. Two in one spring might not seem like much but when you consider our previous record of taking an entire year to get back down into the valley to ride, this is stupendous.

I called to confirm our time and immediately after I hung up Reluctant Cowboy asked if we should bring Sam. I tried calling back but got no response. Sam, of course, is the mule we got for the cost of his vet bill last fall because we had the burning desire to get a longear and are extremely gullible novices who will take any animal someone says needs a home. (He might to go auction, they said, and you KNOW what happens to animals that go to auction…)

I argued that we should not bring a second animal to the lesson without the instructor’s permission to do so, but Cowboy said I was being ridiculous so even though we were running late he loaded his critter in with mine and off we went.

If Sam is one thing he is loud. He got off the trailer and bugled his presence to the entire valley. If Sam is anything else he is pushy, so he immediately began showing Alice and anyone else who was on the premises exactly why he and Cowboy need some pointers. But it was Henry’s and my turn first, so he went into the round pen to bray and have anxiety attacks while we went to the indoor to work on freeing up the hip. 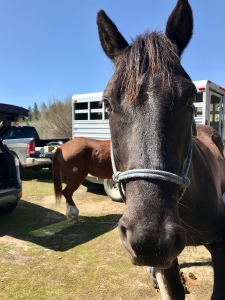 I have no photos from the lesson so please accept these handsome headshots.

We started out doing Alice’s patented ‘stop sign’ work in hand, where the point is some suppling and beginning lateral work to warm up. He did magical, beautiful things for her and then I led him through a much more stumble-and-laughing-at-myself  version. Next we mounted up and worked on tempo at the walk and full, bending corners (look with your eye, outside rein, inside leg), circles to a set number of steps and then a somewhat face-paced, chaotic call and response set of turns all around and across the arena which was actually pretty fun. We finished with the stop sign exercise under saddle. Arena work is getting so much better now that Henry has lost a few pounds and I’ve gained some confidence.

Hm, yes, you make it look so simple.

Sam’s lesson showed just how smart he is, and how ill-equipped we are as horsemen to deal with mules. But it’s encouraging to see how quickly he responds when he’s being asked by someone who knows exactly what they’re doing. By the end RCowboy was able to keep his attention for more than 2.4 seconds at a time and keep him out of his space much more effectively. And I’m happy to say he’s continued the work at home. There are some days I think we’d all be safer and better off without that mule, so I’m glad to see some work being done with him, and to have gotten Alice’s opinion that he’s not a bad animal who’s beyond help.