I live about 20-30 miles from several trailheads into the biggest wilderness in Oregon. Last week my cousin was in town, and we took her up there on her first backpacking trip. Three days after returning from the three-day trip, and with the major projects of fixing the water and replacing our batteries (off-grid living is fun) complete, we realized we had a free weekend day and went back up for an afternoon with Henry.

It might be only 20-30 miles, but they are all dirt, and for most of them you can’t go over 10-20 mph. So it takes more than an hour to get to a trailhead, and when you arrive the horse is coated in a thick layer of road dust. (God I hate you, stock trailer.) He steps out and shakes off and it is absolute Pig Pen.

Also there are a million blind turns and rednecks drive like idiots and I try not to pee my pants in the passenger seat from nerves the entire time.

It was a Sunday afternoon and the horse camp was deserted. Henry, as usual, did not seem to care about anything other than how much grass he could consume, but I was getting myself all worked up about llamas. Because the weekend was ending and it was possible we’d run into pack llamas coming off the trail we were heading out on. My mustang busted through two fences and had a 1-hour long meltdown over a donkey. I don’t want to see him meet a llama.

I put on our awful western saddle because I don’t know why (I feel like people judge me riding in english tack out here?), realized I’d forgotten a part of the breast collar at home, and promptly walked off without a helmet on. I was so nervous I didn’t know if I’d even get on him, so maybe I figured I didn’t need it.

Our first encounter was with two women backpacking with fishing poles. I allowed H to stop, stare and listen as we chatted with the girls. He soon realized they were just humans with long pokey things and OH HEY, THERE’S SOME GRASS.

Next we crossed a wooden bridge with a snort but no real hesitation. Then we just walked normally like a human and a horse on a trail. Then I realized I’d just backpacked 30 miles and had blisters and an Achilles strain and deserved to ride on this overweight horse. So I hopped on (sans helmet; I’m mortified) and we rode a couple miles with four creek crossings, some gnarly rocky terrain (I got off for the worst of it) and our biggest issue the continued struggle to impress upon him that riding time is not eating time unless access to grass has been granted with a certain command. (At one point RCowboy asked if it would be possible to ride him with a muzzle on.) Also he is fat and out of shape and several times performed like a dramatic, unruly pony who would just like to be left on the mountain rather than have to climb one more step, please.

“I could not possibly go on”

On the way back down we rode through a huge meadow (SO MUCH NOSE-LEVEL GRASS) and through the big creek. I took off his saddle and let him have a swim/roll because he’s a good boy and he was going to get filthy with dust on the ride home anyway.

So we don’t have proper trail tack that either of us enjoy and we still haven’t gotten the llama thing (or the bear thing…or the other million things that could go wrong on the trail) out of the way but it was a nice ride and a great first step in the mountains. Where there’s lots of grass. 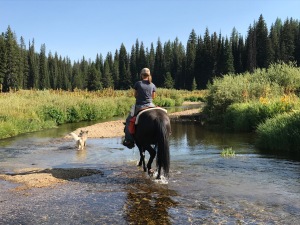 2 thoughts on “To the Mountains”

Snow is melting; time to burn off some winter weight! #blmmustang #demandthebrand #americashorse
I’m not sure I trust him as far as I can throw him, but it’s probably a good idea to always have one that keeps you on your toes. • #mulesofinstagram #mulestagram #longears #longearproblems #instamule
This snow can take a hike any day now. Our hacks last about ten minutes before we’re both frustrated with stumbling through the knee-deep slush.
Recently returned from running around like lunatics on a windy day. 🐎🐎💨💨
Mustang says “screw your fancy, expensive no-freeze waterer. I’m making my own.” 🤦🏼‍♀️
This wild thing had spunk today.